The page is up-to-date as of July 30, 2019.
For more current information, see recent Updates. 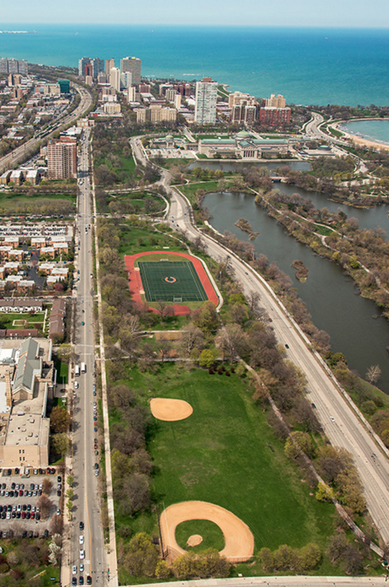 Concerns about the Landscape Design

As Obama Foundation plans were revealed, it became apparent that, rather than harmonizing with Jackson Park, the plans would make massive changes in many ways.  All traces of Olmsted’s Jackson Park – trees, shrubs, grass, distinguishing grade levels – would be obliterated from the OPC site, including over 400 trees, many magnificent mature specimens. While the existing track and field would be relocated to the south end of the site, other community spaces used for athletic, family picnics, and other leisure pastimes would be lost.

Many in the community have voiced fears that the current open, natural character of Jackson Park would be destroyed by the goal of creating a Millennium Park-like ambiance and that local park users would lose out in the contest with tourists.  These concerns were exacerbated by the Obama Foundation’s demands to close Cornell Drive along the east side of the site (see “ Concerns about Site-Shifting and Road Changes” below), a change that would allow the crowds visiting the Center to spill directly over into the Park to the edge of the lagoon, disrupting the treasured tranquility of Wooded Island, currently the Paul Douglas Natural Sanctuary. 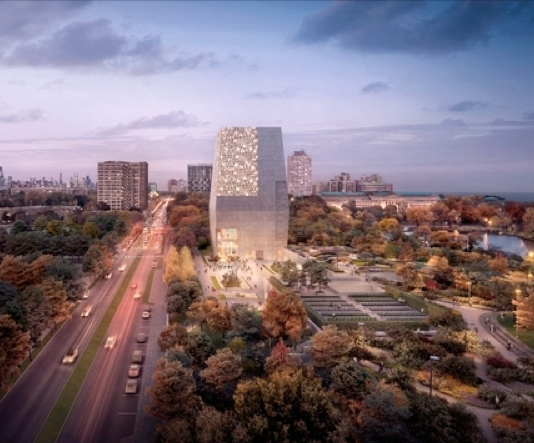 Redesigned OPC tower as of January 2018.

Beyond the proposed transformation of the site’s basic landscape, the architectural design and programming proposed for the OPC are not in keeping with the calm and natural character of Jackson Park. The Obama Foundation proposed an entertainment area (see image below) modeled on Millennium and Maggie Daley Parks with a mix of slopes, a non-traditional playground, and an open lawn for outdoor concerts and outdoor movies.  It includes a large athletic center (40,000 sq. ft.) that could be used for special event rentals and has an unclear, potentially competitive relationship with the existing Jackson Park Fieldhouse and South Side “Y,” both nearby.  While some of the proposed facilities were designed with low profiles with green roofs, the main structure of the OPC would be an extremely tall  museum tower at the far north end of the site – initially proposed to be 180’ but later revised to be 235’, the equivalent of approximately 23 stories tall, with rental space on top. Such a dominant vertical structure in an historic public park seems out of place to many.

Concerns about Site-Shifting and Road Changes

Amid controversy, on March 18, 2015, the Chicago City Council adopted Ordinance O2105-192 to approve the offering of spaces in Jackson and Washington Parks for the construction of the Obama Presidential “Library” (now “Center”).  That original site in Jackson Park was defined as stretching between Stony Island Avenue and Cornell Drive and between 60th and 63rd Streets.

There was no formal, public mention of the Obama Foundation’s plan for an altered site – or for the building to be a “Center” rather than an actual “Library” – until former President Obama unveiled the OPC design plans on May 3, 2017.   The altered site requires the closure of Cornell Drive between 59th and 63rd Streets and the closure of the eastbound segment of the Midway Plaisance between Stony Island Avenue and Cornell Drive.  (Note: The physical Obama presidential archives will be located at a site elsewhere operated by the National Archives and Records Administration.  The Obama Foundation has paid to have the archives digitized so as to be available online; this arrangement saved the Obama Foundation many millions by freeing it from NARA requirements and oversight). 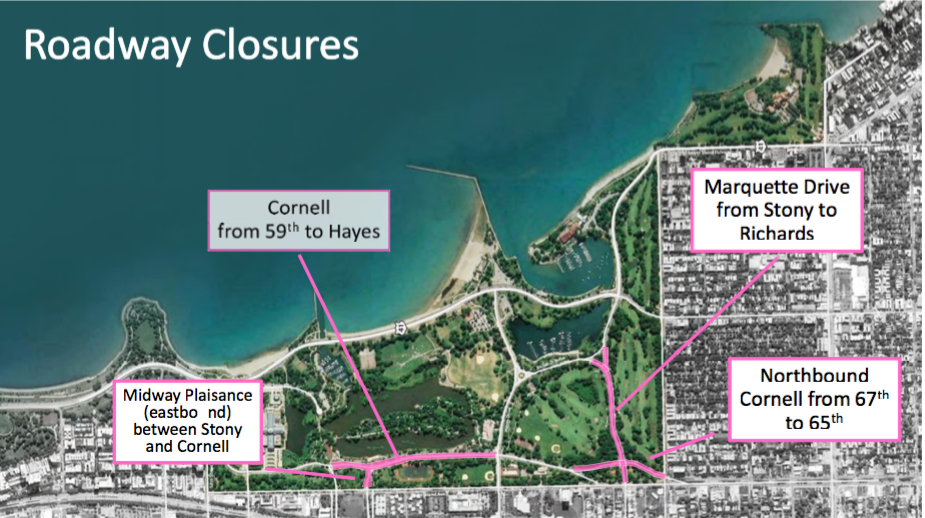 In June, July and August, 2017, the City and the Park District hosted several public meetings featuring the new OPC plan unveiled in May and presenting as well both a radical new road plan developed by the Chicago Department of Transportation (CDOT) to “accommodate new traffic and parking demands of the OPC” and a plan to merge the Jackson Park and South Shore golf courses, subsequently also directly connected with President Obama. The CDOT road plan, to be implemented at taxpayer expense ($175 million or more), would have a dramatic impact on Jackson Park:

Significant concerns have been raised about the road plan. Near neighbors, those who park in the neighborhood on a daily basis for work, and those who commute through the area have major concerns about traffic delays and safety.  Stony Island Avenue hosts three schools and has considerable related vehicular and also pedestrian traffic: CPS’ Bret Harte elementary school at Stony Island and 56th; the UC Lab School campus for kindergarten and early grades at 5800 Stony Island Avenue, and CPS’ Hyde Park Academy High School on Stony Island just north of 63rd.  Those who walk in the area for work, school, or daily living are concerned about pedestrian safety. Park lovers and historic preservationists are concerned about the unwarranted destruction of the Olmsted design.  To quote the Park District’s 1999-2000 Jackson Park/South Shore Framework plan,  “The Olmsted design has served the park well over time and should not be compromised by future plans.”

In fact, the OPC could be constructed in Jackson Park without these massive and expensive taxpayer-funded road changes that destroy the historic design.  Jackson Park Watch commissioned an alternative traffic plan that accommodates the construction of the OPC in Jackson Park but keeps Cornell Drive open and has called for a formal review of this and other alternative traffic proposals. Yet, none of the public presentations of the plans for the OPC and related road changes during 2017-18 allowed for consideration of any alternatives.

Also first announced at the June 2017 public meeting noted above was the Chicago Park District’s “South Lakefront Framework Plan” process.  Billed as a way to collect community input on updating a Jackson Park/South Shore framework plan dating to 1999-2000, it featured numerous meetings asking community members their views about picnic areas, boardwalks, the location of the local dog park, pickleball courts, bicycle paths and crosswalks, and much more.  What it did not ask people about were the plans for the Obama Presidential Center, the CDOT-designed road closures and realignments, or the proposed merged/expanded golf course: those were presented on all of the design boards as givens.  Subsequently, the City and Obama Foundation have repeatedly argued disingenuously that it was the South Lakefront Framework Plan that required the construction of the OPC, the execution of the CDOT-designed road changes, and the merger and expansion of the existing golf courses.  The SLFP process became in effect a front operation that could be cited as cover for the virtually total absence of legitimate community consultation.

The Obama Foundation did make one concession to the community when it was forced to shelve plans for an above-ground parking garage on the Midway Plaisance between the Metra tracks and Stony Island Avenue.  That, however, is the sole change of any significance that has been made in OPC and related plans since they were first unveiled in detail in June, 2017.  In fact, during this interval the design of the museum tower building was increased from 180’ to 235’.

Mayoral rhetoric surrounding the 2015 decision to give historic public parkland to the Obama Foundation strongly suggested that the City and Chicago Park District would find new parkland to replace all of the public park acres given to the Obama Foundation.  Most recently, however, both the City and Obama Foundation have insisted that only one (1!) acre of replacement parkland is needed, that space directly under the museum tower.  Instead, they argue, the low-rise buildings with green roofs, the concrete pedestrian plaza and the Maggie Daley-like slopes and paths all count as public parkland.  That is yet another issue to be resolved.

Notwithstanding the many unaddressed concerns, in an apt illustration of the famed “Chicago Way,” on May 17, 2018, the Chicago Plan Commission unanimously approved the applications for the Obama Presidential Center and the CDOT-proposed road changes. See our Update from May 21, 2018.  There was no dissent. There were virtually no questions.

As a follow-up, there were no surprises when a compliant City Council passed the Mayor’s proposed new OPC Ordinance (O2018-7136)  on October 31, 2018 without questions or dissent. No attention was paid to significant outstanding problems – costs to taxpayers, displacement of local residents, loss of public parkland, traffic problems likely to result from road closures and realignments.  (See our Update from November 1, 2018.)

The actual Ordinance passed by the City Council included a long list of more or less factual assertions (the “whereas”s), along with nine short substantive sections that authorize the City to take the following key steps BUT only after the federal reviews are completed:

The proposal for the OPC, given its scale and scope and attendant demands for major road reconfigurations, would effectively “transform” Jackson Park.  This dramatic change would be made without any central vision of what the park as a whole could and should be. It would be made without allowing substantive community assessment of the impact of the OPC on the park and the surrounding neighborhoods and without developing a comprehensive plan for the entire park. It would set an unfortunate precedent for the conversion of public parks by fiat rather than by community consensus. This – the future of Jackson Park – is the central issue presented by the Obama Presidential Center.

WHAT YOU CAN DO

JPW urges those concerned about the Obama Presidential Center to communicate those concerns to local officials and media outlets.  See the Take Action page for suggestions about who to contact along with their e-mail addresses.